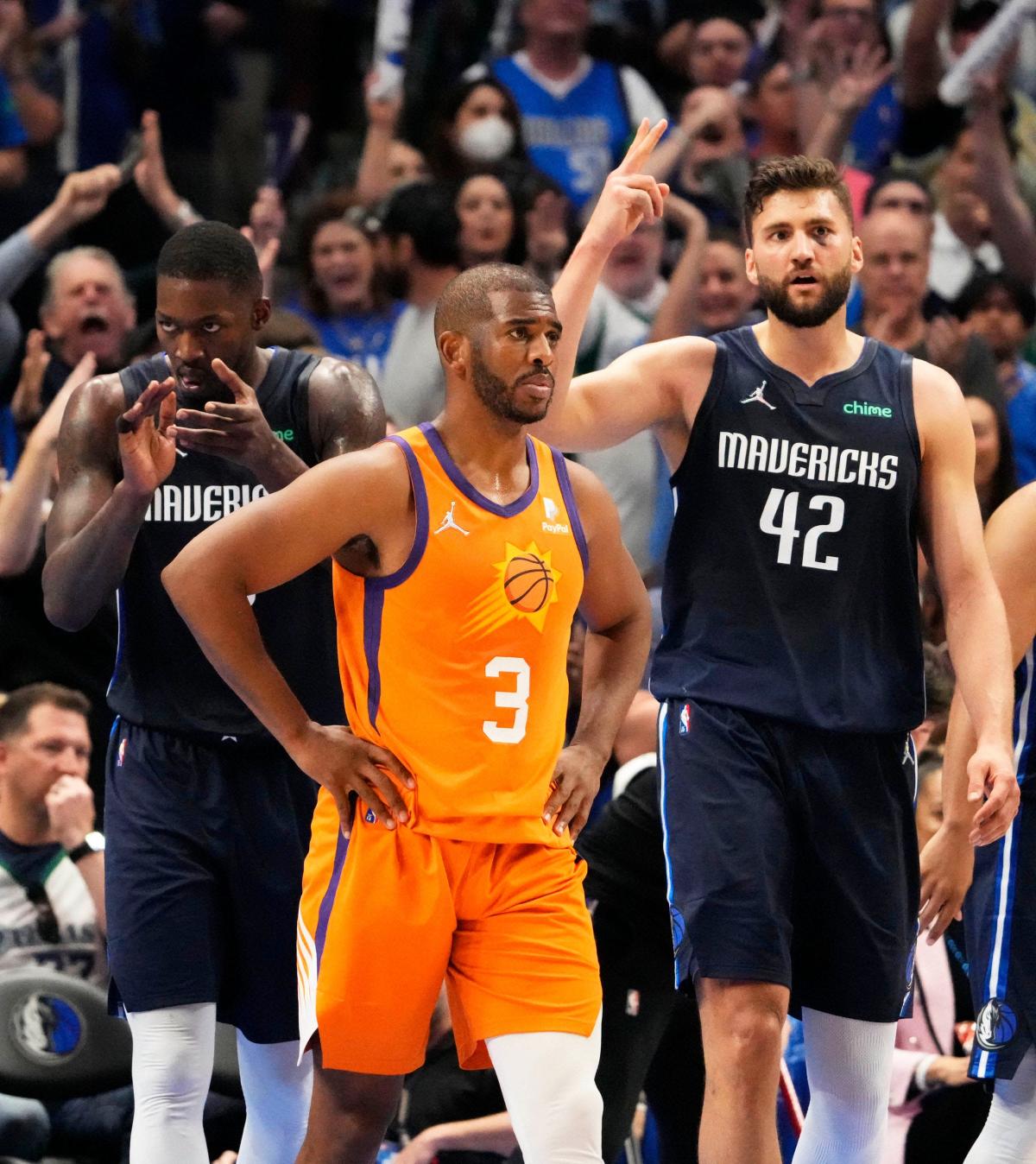 DALLAS – The Phoenix Suns arrived here less than a week ago with chests puffed up, chins up and a 2-0 lead against the Dallas Mavericks in the Western Conference semifinals.

Two losses at the American Airlines Center have left the Suns in need of repair. “We need to fix some things,” coach Monty Williams said after Sunday’s 111-101 loss in Game 4.

The list of repairs is long. Where to begin would seem to be the pertinent question, given the stagnant offense, the porous defense, the struggles of a 37-year-old point guard and the anemic production from the bench in Games 3 and 4.

The biggest problem is a defense that has allowed too much penetration into the lane and given the Mavericks as many uncontested 3-point attempts as they get in a shoot-around.

And a shoot-around is what the first half looked like on Sunday afternoon. The Mavericks made 14 of 24 3-pointers in the first half to build a 12-point lead.

The Suns improved in the second half, but the damage was done. On Sunday, it was irreparable.

“I thought our first-half defense was about as bad as it has been all year,” Williams said. “This is something I have to fix as a coach.”

Combine the defensive lapses with committing 17 turnovers and point guard Chris Paul fouling out in the fourth quarter scoring only five points in 23 minutes, and it seems a statistically anomaly the Suns didn’t lose more than 10.

What should trouble him is that most of his issues in the two losses to Dallas are signs of a team that had a mental edge rounded off by taking a 2-0 lead.

Pick a cliché, but a team that is focused, locked in, does not give up as much penetration as the Suns did, failed to close out on shooters as often as they did and throw the ball away as many times as they did.

After the game, Williams talked about the Suns’ need to take ownership of their mistakes the last two games. It’s the only way to hammer out the dents and look like the team that went to the Finals a year ago and won 64 games in the regular season.

Williams included himself in that, as well as he should. He’s been out-coached the last two games by Jason Kidd, who, after two losses, calmly prodded his best players to play better, then gave them the tools by which to do it, most notably, an offensive attack that has left the Suns. reacting. And most often, reacting poorly.

While espousing personal responsibility for losing both games in Dallas, Williams also noted “we worked” in the regular season to be in this position: having a home-court advantage in a tight series.

The series is now down to the winning three out of the last three, and people shouldn’t be surprised by that, said guard Devin Booker, who led the Suns with 35 points.

Booker pointed out that in the last two seasons the Suns have been in the series against the Lakers, Clippers, Bucks and Pelicans that went six games. Only once did the Suns sweep, against the Nuggets last season.

“We understand that it’s a series,” he said, “that it’s a reason for the playoffs, the best teams in the NBA are here. Taking that all in, flushing this game and coming out with the right mentality. If we’re worried about the last couple games, I think we’re at a disadvantage. “

But taking a problem of ownership does mean you have to acknowledge there is one. Booker pointed to the Suns defensive lapses, but he also made the case again that officials had an undue influence in the last two games.

It’s a topic Booker won’t let go, but he stopped well short of getting fined. Just go watch the last two games, he said, and see what you think of the officiating.

Paul’s limited availability because of foul trouble hurt, no doubt. But the Suns could have controlled some of that. Paul had three fouls when Williams put him back in the game with 45.7 seconds left in the second quarter.

Paul was called for his fourth foul going after a rebound in the final seconds of the half, which wasn’t a prudent move given his situation. Williams said he should have kept Paul on the bench.

Paul’s fifth foul came just 2 minutes into the third quarter, when he dribbled in front of Jalen Brunson, drawing contact. That’s a foul on an offensive player these days, and, again, a more prudent option was available to Paul. His sixth foul came about 90 seconds after entering the fourth quarter. That was a bad call.

It was Paul’s second consecutive poor game. He committed seven turnovers in the first half in Game 3, and his early foul trouble Sunday made a comeback more difficult. But it was not impossible.

The Suns trailed by nine points with 2:21 left in the second quarter. A strong finish could have flipped the game. Instead, they missed four shots, including two wide-open 3-point attempts, and Paul picked up that fourth foul. The Mavericks extended their lead from nine to 12 points in that time.

The end of the third quarter follows a similar pattern. They missed their last four shots and their only two points were free throws from Booker.

The Suns shot under 50 percent for the second consecutive game, and the declining production is tied directly to the slippage defense. The Suns like to play offense in transition, but as Booker said, it’s hard to play fast when you’re taking the ball out of the net so often.

As disastrous as this trip was for the Suns, they can overcome it. Game 5 is in Phoenix Tuesday night before a return trip to Dallas on Thursday. Winning those games is how they closed out the Pelicans in round one.

But they return home injured, wobbling and vulnerable.

This article originally appeared on Arizona Republic: Suns have series on their hands after debacle Mavericks